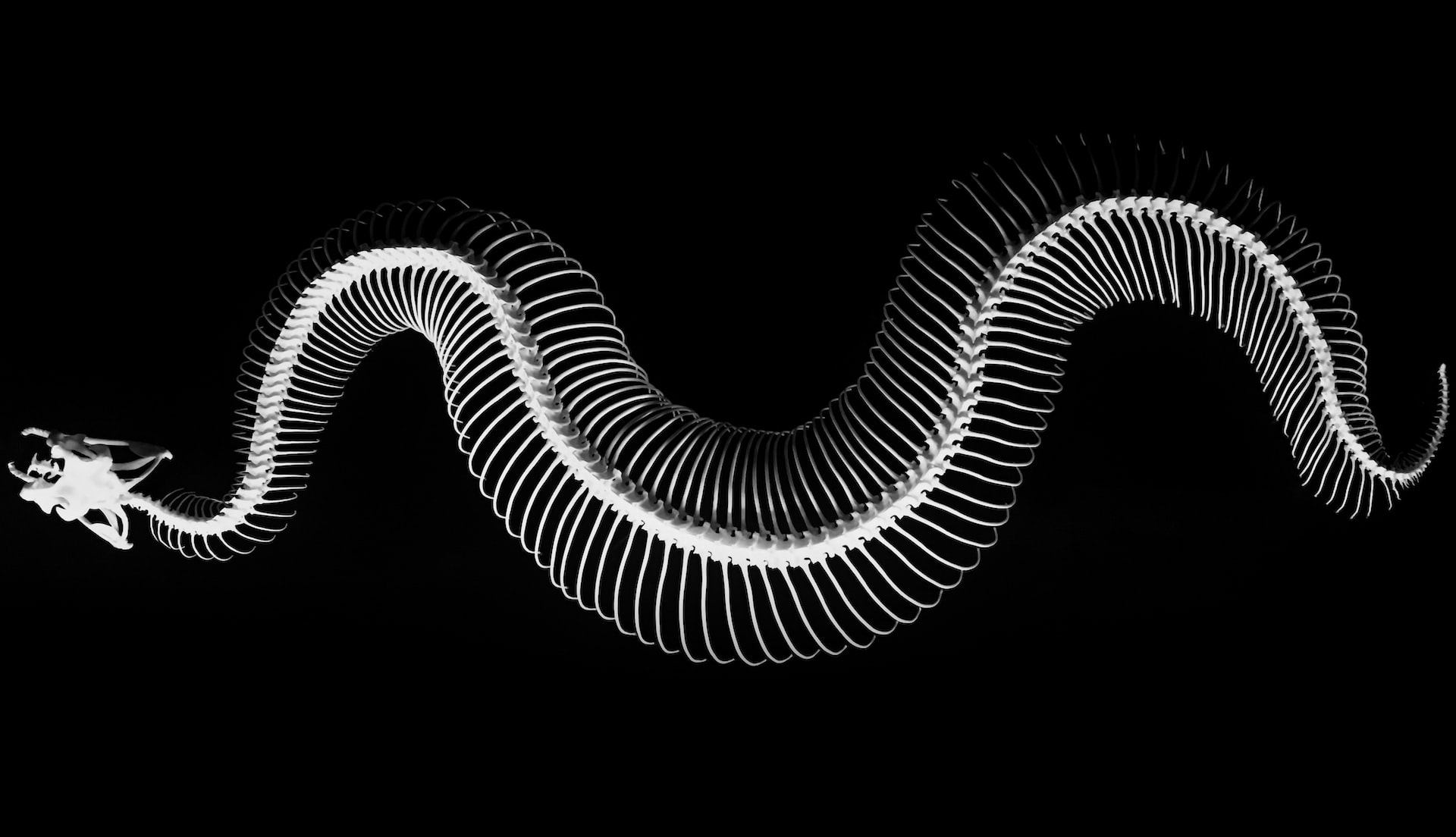 TL;DR - This post will walk through the process of creating a Headless Ghidra Python VScode template. This is not recommended as the official language for Ghidra is Java and the supported IDE is Eclipse, but we will give it a go. The process involved “digging up” the Ghidra Python Scripting landscape and understanding what was possible. The lessons learned are capture in the VScode template ghidra-python-vscode-devcontainer-skeleton that alleviates the pain of getting setup with Ghidra Python scripting and leverages the power of devcontainers.

Wanting to leverage some of the power of Ghidra FlatAPI, I started to dig into the methods of creating Ghidra Scripts. Ghidra is written in Java, and it’s scripting API is Java. It supports Python scripting via Jython (explored in detail below). This makes modern Python 3 development a bit more difficult. I set out to try to find a practical way to develop my Ghidra script in Python.

To understand where the current state of Python scripting with Ghidra, I started with a quick search to see what was out there. At the time I found the following and learned from each:

From those articles, we begin to understand the possibilities (and limitations) of Python scripting with native Ghidra. Natively, Ghidra supports the use of Python via Jython (a reimplementation of Python in Java).

For developing Ghidra scripts, the obvious choice is clear:

When scripting with Ghidra, the logical choice for editing or creating scripts is the Eclipse IDE. A Guide to Ghidra Scripting Development for Malware Researchers

Ghidra prefers Java and recommends you use Eclipse.

Thoughts on Java and Eclipse

But! I want to use an IDE and language I’m familiar with. If you are reading this far, perhaps you are with me.

Before we solve a problem that might be already solved, we take a look around for existing VScode templates. An experienced Ghidra developer atsrelky had a repo that seemed to be what I was looking for. It was a VScode template, vscode-ghidra-skeleton for Ghidra scripting. He had completed the work to integrate Java, but didn’t yet have support for Python. 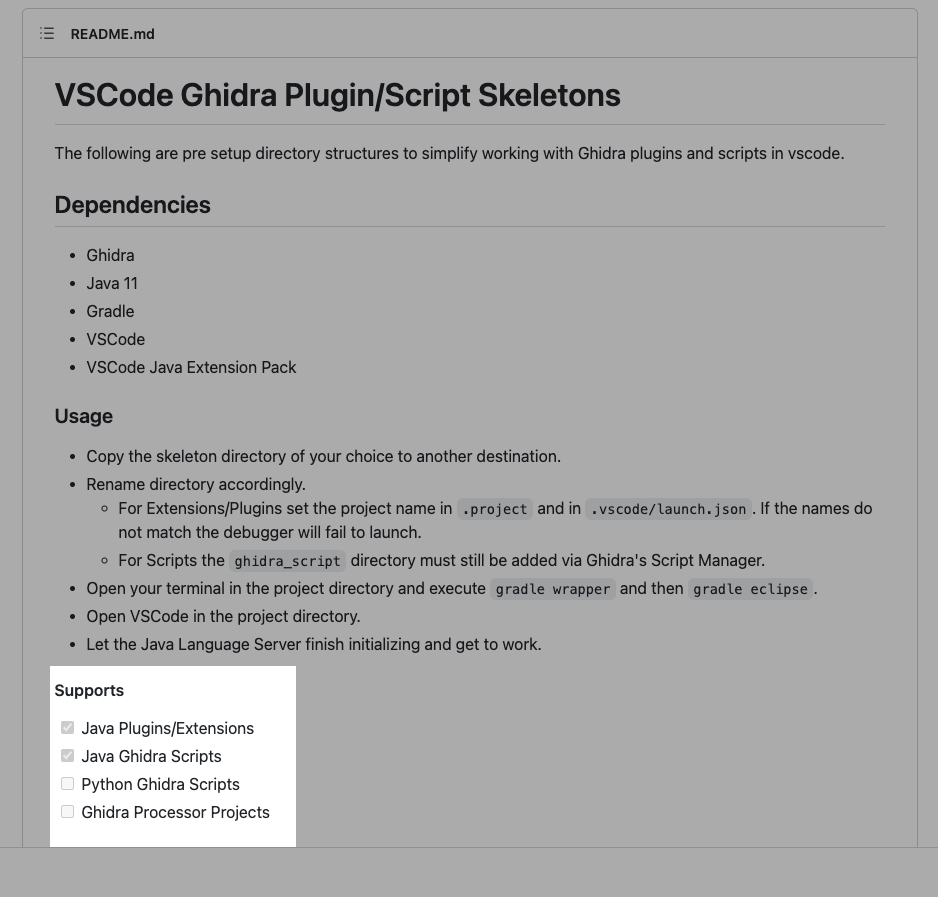 I didn’t see any other template examples on GitHub, but thanks to astrelsky I had inspiration. 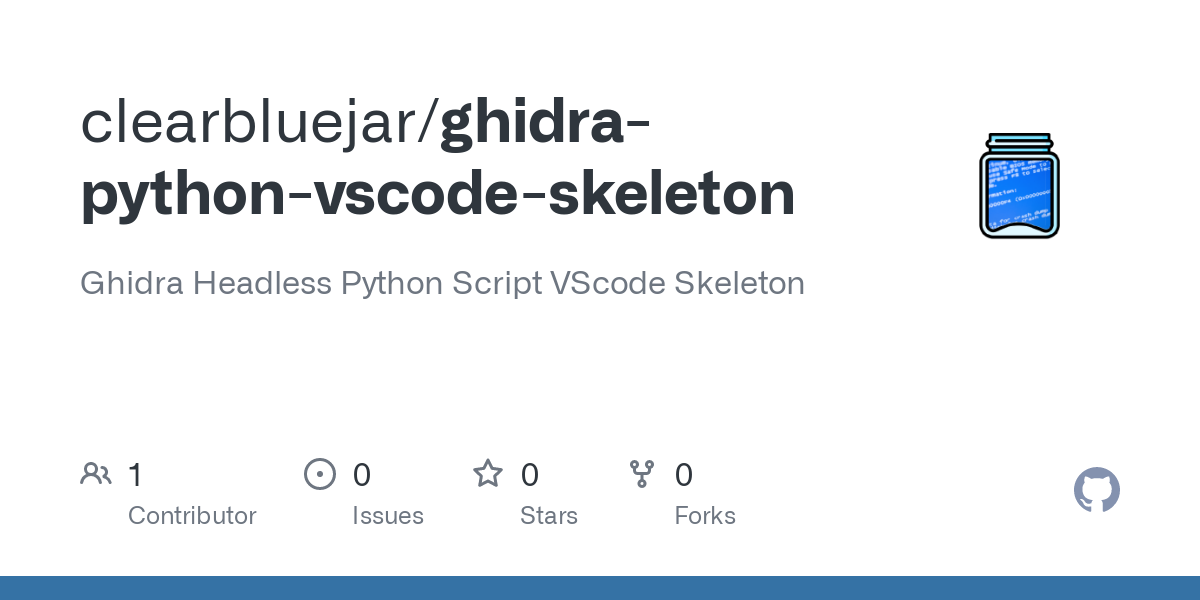 To know how to build a Ghidra Python development environment, I had to understand the typical workflow for leveraging the Ghidra API and script. This is what I came up after understanding the standard instructions from Ghidra’s Headless Ghidra Scripting README.

Quoted from the first version of the template ghidra-python-vscode-skeleton:

Ghidra is a binary analysis tool (and much more). In order to perform analysis via script, you first need to create a project and add binaries for analysis. Once a project exists with at least one binary added, headless analysis (scripting Ghidra) can begin.

This skeleton project prescribes a workflow and demonstrates various ways to run headless Ghidra Python scripts. The steps can be modified to suit your needs.

These steps can be accomplished with the following two commands using Ghidra’s provided analyzeHeadless script.

The first iteration of the template did just that, provided the simple workflow. I created a project that you could clone, setup with pip with venv. It would run a python script using the prescribed method by running the analyzeHeadless script included with Ghidra with Python’s subprocess module.

The project assumed you had Ghidra installed, and you would update your settings.json to match your development environment. This file held some default arguments needed to analyze headless. The project supported autocomplete via VDOO-Connected-Trust/ghidra-pyi-generator. 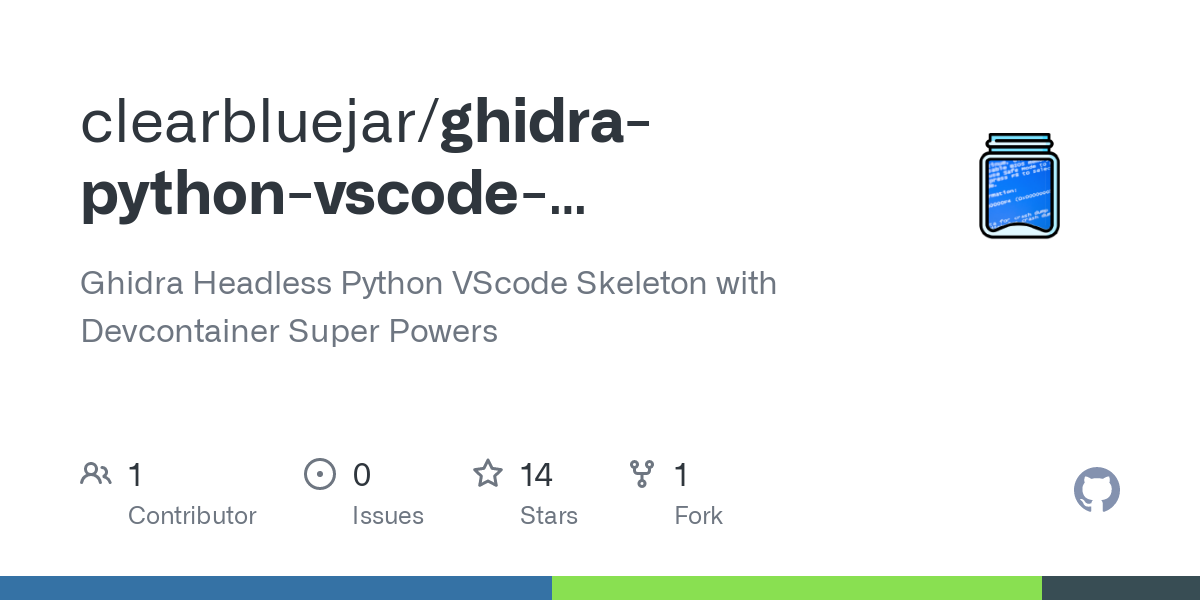 The Jython project provides implementations of Python in Java, providing to Python the benefits of running on the JVM and access to classes written in Java. The current release (a Jython 2.7.x) only supports Python 2 (sorry). There is work towards a Python 3 in the project’s GitHub repository. Jython

This is Ghidra’s “native” support for Python. Jython is an implementation of the Python language in Java supporting up to Python 2.7. The Python 2.7 limitation is the primary reason the below projects exist. It is run within Ghidra’s Script Manager or the analyzeHeadless script as shown above. For IDE debugging, Eclipse is supported, but vscode-python has said no. 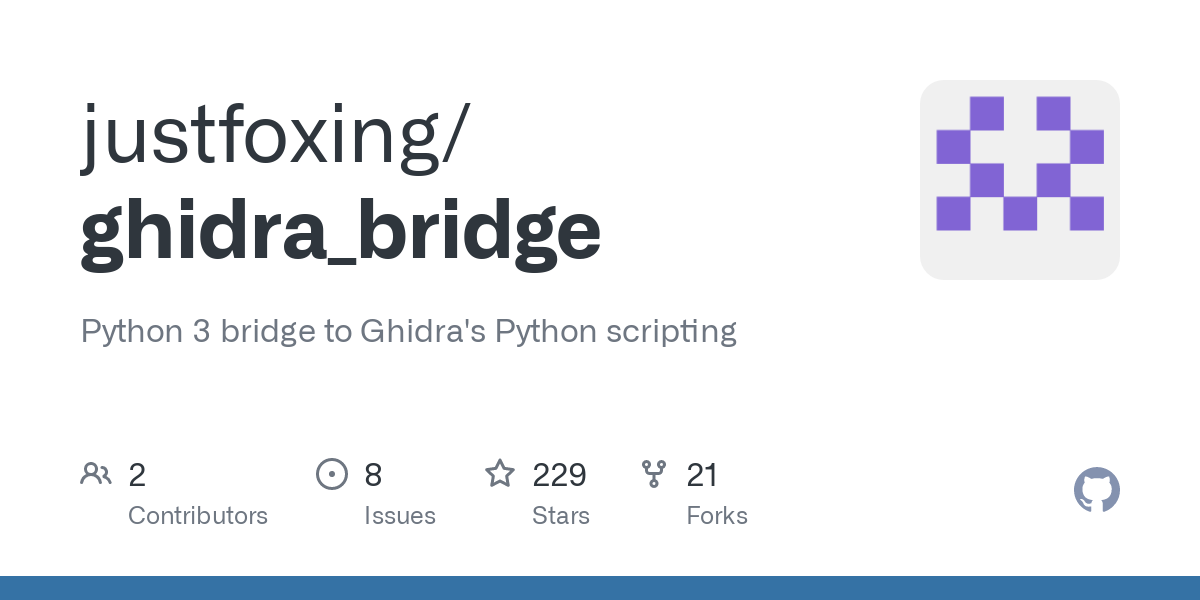 jfx_bridge is a simple, single file Python RPC bridge, designed to allow interacting from modern python3 to python2. It was built to operate in constrained interpreters, like the Jython interpreters built into more than one reverse-engineering tool, to allow you to access and interact with the data in the tool, and then use modern python and up-to-date packages to do your work. jfx_bridge

As far as I understand, it runs a Python RPC server via Ghidra’s Jython using jfx_bridge. First you need to run the Ghidra Bridge RPC server, then connect to it in your script.

Then connect to the server and run the desired script. Code from sample_bridge.py:

As you can see in the code, the overhead is a bit high. For scripting, we need to first run the server, wait for it to be ready, connect to it within the context, and when I’m done I have to wait for the connection to close. Not only that, I found it incredibly slow.

Ghidra Bridge is an effort to sidestep that problem - instead of being stuck in Jython, set up an RPC proxy for Python objects, so we can call into Ghidra/Jython-land to get the data we need, then bring it back to a more up-to-date Python with all the packages you need to do your work. https://github.com/justfoxing/ghidra_bridge

For anything that is directly accessing data, it first has to run in Jython, then be brought back over RPC to your Python 3 client.

Despite being slow, it allows you to debug within VScode. 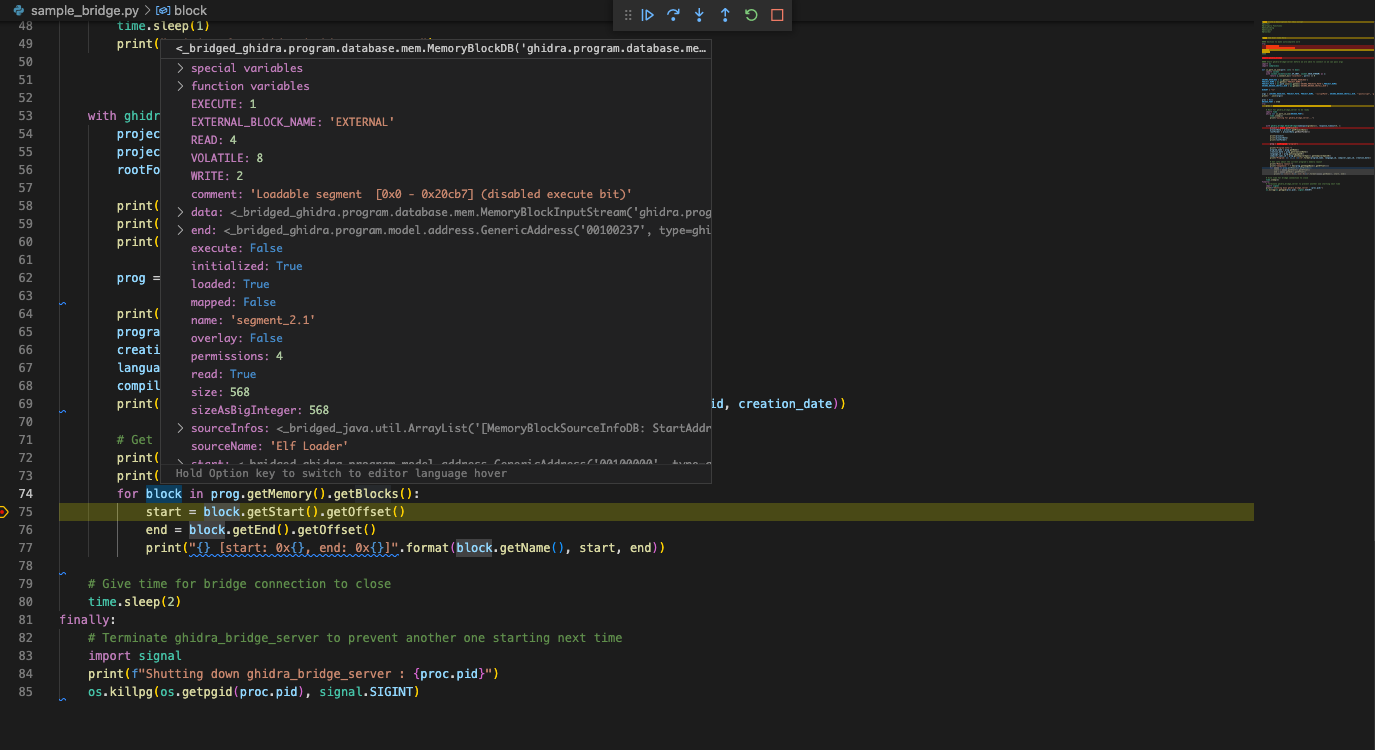 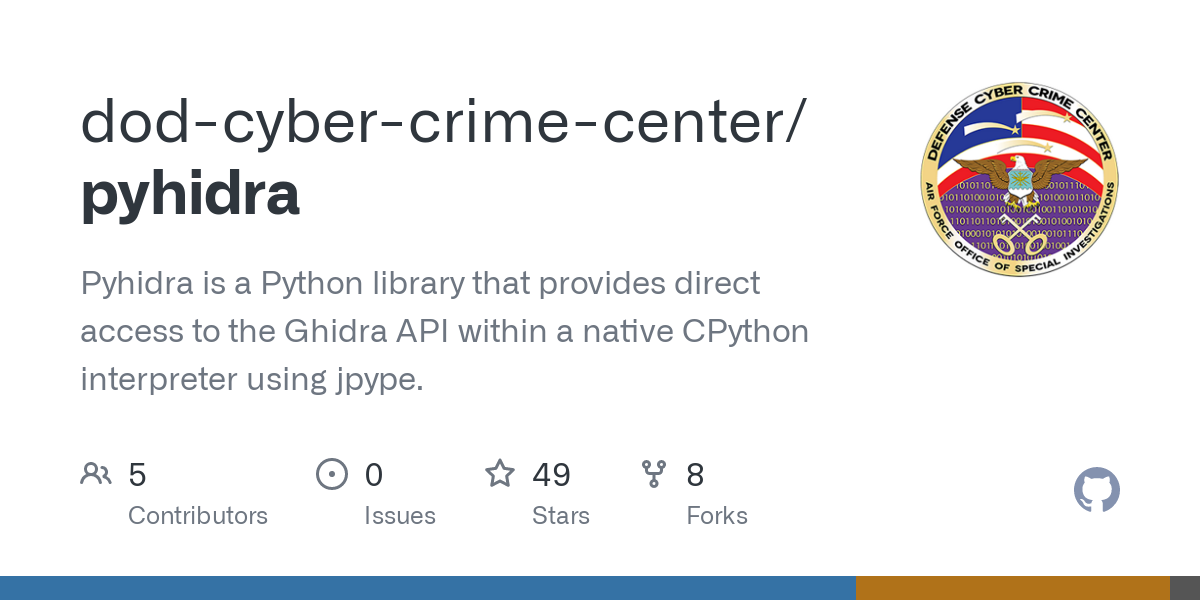 Unlike Jython, JPype does not achieve this by re-implementing Python, but instead by interfacing both virtual machines at the native level. This shared memory based approach achieves good computing performance, while providing the access to the entirety of CPython and Java libraries. https://jpype.readthedocs.io/en/latest/

Pyhidra leverages CPython to interface with Java at the native level. No bridges or translation. It does this with Jpype. Full disclosure, this is my favorite Ghidra Python implementation so far. The Pyhidra library is clean and straightforward. The library installs a plugin to provide a Python 3 interpreter for Ghidra (so that it can be run in the GUI), or you can run your script with Python 3 (via JPype), without the need to modify Ghidra. The reason being is that JPype will start a JVM for you, load up Ghidra Java classes in its entirety, and provide you access to all the Ghidra Java classes from Python.

Taking a look inside Pyhidra we can see how it starts a JVM for its launcher.py:

After it is initialized, you can then import classes and make direct calls to Ghidra. From sample_pyhidra.py:

As you have a direct connection to the JVM, you can debug it natively with VScode:

When I script something new now, I use Pyhidra. It relies on Jpype, which isn’t perfect and I was able to find a fix another issue with conflicting module names, but I have to say it is the best I have found so far for Ghidra Python scripts. 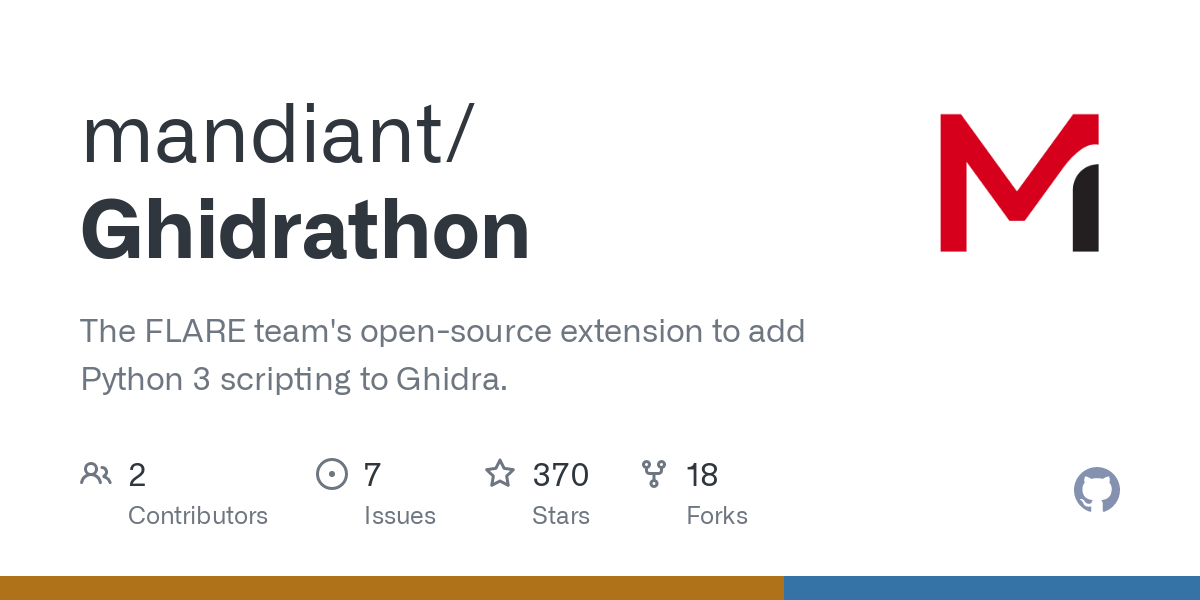 Ghidrathon came out while I was creating this template, and I can’t see any benefit this library brings over Pyhidra and Jpype. It similarly provides Python 3 support, like bridge of Pyhidra, but it doesn’t support in IDE debugging for VScode. It acts more like Jython interpreter running the scripts (albeit Python 3).

Perhaps I am missing something, but I can’t see all the hype. It also seems to have issues with threading? I didn’t see an easy way to integrate it into my template, or make it work for VScode besides a subprocess example like AnalyzeHeadless.

Leveraging one of the ways to run Python options above, you can have Python debugging in VScode, autocomplete, or both. The last problem to solve to allow the template to work on all platforms. I couldn’t see a way to do this without providing 1000 settings.json configurations and launch.json and tasks.json variations. Instead, I went down the path of containers to solve it for me.

Devcontainers (docker containers) within VScode allow you to define and ensure your development environment despite your platform. This is really powerful when you are trying to create a template that behaves the same anywhere. If you haven’t tried developing inside a container with vscode, you should.

“One of the useful things about developing in a container is that you can use specific versions of dependencies that your application needs without impacting your local development environment. “ Get started with development Containers in Visual Studio Code

“This lets VS Code provide a local-quality development experience including full IntelliSense (completions), code navigation, and debugging regardless of where your tools (or code) are located.” Developing inside a Container using Visual Studio Code Remote Development

Here is a quick list of how I leveraged devcontainers:

And the result is pretty smooth.

In summary, you now have ghidra-python-vscode-devcontainer-skeleton. A self-proclaimed amazing template for Python script development with the Ghidra scripting API. To get started, check out the Quick Start

Ghidra is written in Java and provides development support for Eclipse. Perhaps Python and VScode shouldn’t even be considered. Admittedly, it was my inexperience with Java and Eclipse that drove me down this path. I blame Ghidra. With Jython integrated, Ghidra Python scripting was just accessible enough to make me push through the pain of creating this template. That being the case, this exercise taught me quite a bit about Python and Java bridges, pipes, and devcontainers. Hopefully, you as well.

Please reach out @clearbluejar with questions or comments. Also appreciate any feedback or corrections you might have for the post.

These Are Your First Steps

Hello World Saying hello to the world with a first post. I have seen several slick github.io pages leveraging Jekyll to create modern blogs and websites that look great with seemingly little ove...

TL;DR - Windows RPC enumeration, discovery, and auditing via NtObjectManager. We will audit the vulnerable RPC interfaces that lead to PetitPotam, discover how they have changed over the past year,...